The Mossberg 500 is one of those firearms designs that is here to stay. Regardless of if you prefer it or its competition, the Remington 870, you cannot deny the overall popularity of this ubiquitous shotgun. Introduced in 1961, the Mossberg 500 was originally designed as an inexpensive alternative to the popular Remington 870, and to the classic Winchester Model 12. The Mossie had two features that automatically distinguished it from its competitors. The first was the all-aluminum receiver to save weight and cost of manufacturing. Most shotgun designs prior to the 500 had heavy, milled steel receivers with a recess in the top that allowed the bolt to lock into. The Mossberg instead has a steel barrel extension that slides into the receiver about two inches. The steel bolt lug lock into the recess and safely seals up the barrel. This made for a very strong and reliable, yet light combination. The second innovation is the sliding tang safety. 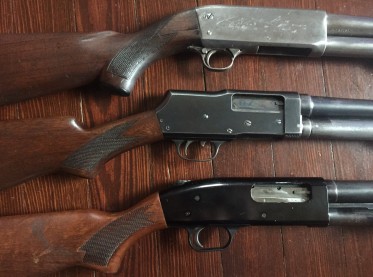 A majority of shotguns at the time had either the classic crossbolt trigger safety, or the “suicide” trigger guard safety. The Mossberg’s tang safety was ambidextrous and lefty friendly. The big red dot, and spring loaded indent made it very easy to see if the safety was on or off.

For some time, the Mossberg wallowed in the shadow of the Remington 870. This is mainly because at the time it was thought to be a more handsome and well made shotgun, it had been introduced earlier, and had a fruitful law enforcement contract with various departments and agencies. This might have spelled the demise for the 500 as another cheap pump shotgun from the fifties and sixties (of which there are many!) until 1979 when it passed the very stringent U.S. military’s Mil-Spec 3443 test for combat shotguns. After this, the floodgates opened for DOD and LE contracts. The modularity, reliability, and ease of use have since propelled the Mossberg 500 to the top of the heap in the pump shotgun category, with 10 million of the boom sticks sold.

One of the best features of the Mossberg 500 is its modularity. The Mossberg 500 has evolved over the years into many different variants based on purpose, and chambering. A quick look at the different variants of Mossberg shotguns based off the basic 500 design yield about a couple of dozen, with half that still in production. One can purchase a youth 500 chambered in .410, a cantilevered slug gun, a military issue 590, or a goose gun for those long, 12 ga. 3 1/2 magnums. The 500 is equally at home under the bed for self defense, in the field for hunting, or in service of our nation in the most austere of environments. 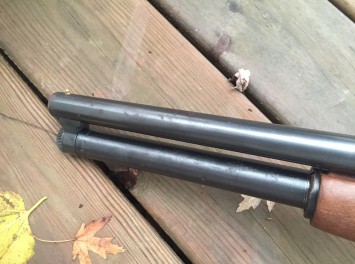 The full length magazine tube increases the capacity of the Persuader to 8 rounds, over the standard 5. Note the plain gold bead

I have owned Mossbergs in some form or fashion for most of my life, so I do have some experience with them. In my military endeavors I have also had opportunity to use a Mossberg 590, which is the military version of the 500 with some slight differences. The particular Mossberg I am going to highlight is my Persuader 8 shot. The Persuader was introduced in the late seventies as a contemporary to the Ithaca 37 DSPS, the Remington 870R, and the Winchester 1200R, all popular police/riot style shotguns. The Persuader, like the others mentioned previously, had an 8rd magazine tube and a 20” cylinder bore, smooth barrel.

When I first purchased the my Persuader used, for a very low, low price, it came with a pistol grip and a pistol grip pump fore end. This made for a very compact and cool looking package, but was downright painful to shoot, even with field loads. I quickly ordered a factory wood stock and fore end and installed them immediately. This made for, in my opinion, a much more attractive and classic Persuader look. Plus, it is shootable now.

The shotgun is a fairly compact 41” overall and weighs 7lbs even. The trigger breaks at a heavy 7 pounds, but I like a heavier trigger on my shotguns for snap shooting, so that is not a detriment in my mind. To field strip the 500, ensure the firearm is unloaded, open the action by pressing the slide release just behind the trigger guard, and unscrew the barrel from the magazine tube. With the barrel off, that is as far as you should need to go for most cleaning. To reassemble, simply reverse the order of disassembly.

As for sights, all it sports is a plain gold bead on the end of the barrel. I prefer beads on all my shotguns, that is just a personal preference. I have used ghost ring sights, and they work great for slugs, but in my opinion, they detract from the speed that a shotgun drives from. As an aside, my 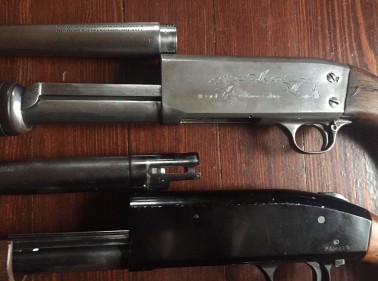 The very long barrel extension on the Mossberg is clearly seen as compared to the Ithaca’s shorter, threaded barrel. This allows the Mossberg’s receiver to be made of aluminum, instead of milled steel, and still take the abuse of full power 12 ga. loads.

specific shotgun is factory tapped for optics on the receiver bridge.

On the range, the Persuader makes for a unique shooting experience. I did a series of different drills, which were somewhat difficult to capture on camera, but I think they capture the essence of the capabilities of the Persuader

I first shot a magazine full of slugs at a 24”x36” paper target 100 yards away. These slugs were Winchester 1oz lead slugs traveling along at 1700 fps. That is right up there with a heavy 45-70 load, and boy, could you feel it. Accuracy was certainly minute of man. I could keep all the slugs on the target, but with the smooth cylinder bore barrel, and a gold bead as my only sight, there was no rhyme or reason as to where they landed on the target. I then paced off 10 yards and fired a myriad of military 00 buckshot, high brass no#6 turkey loads (which were by far the stiffest recoiling), no#8 field loads, some very unique .69 caliber double round ball loads, and some mini-2” 00 buckshot loads. What I found is that, reliability in feeding and firing is flawless, but that it tends to pattern high and right. The reason it was doing this is because the wads/shot cups were keyholing into the paper targets I had set up. I think this has to do with the lack of constriction in the barrel, but what do I know.

I then shot two rounds of 25 clay pigeons on the automatic thrower ( I hesitate to say trap or skeet, because I know some of you out there are actual trap and skeet shooters, and I would hate to degrade the sport with my misuse of terms J) The first round, I actually hit 23/25 targets, but only because I was snap shooting as soon as they were thrown. On the second round, I waited until the clays were out to about the 25-30 yard range. The cylinder bore and short barrel really showed itself because my score dropped to 11/25. Past 30 yards, I hit no birds, the pattern was just too spread out.

My range session uncovered quite a bit of information. For one, this is a powerful and absolutely devastating package at close range with the proper ammo. Past 25 yards, and you better have slugs on board. That’s not to say you won’t hit your target, but your chances of getting a disabling hit are severely diminished, even with buckshot.

The Mossberg 500 Persuader is an excellent choice for home defense and/or duty work. The pump action allows any variety of 12 ga. shells 3” and shorter to be fed reliably, which only enhances its usefulness. The ergonomic and reliable controls make this shotgun the one to beat, in my opinion. If you have never had the opportunity to dump 8 rounds of 00 buck into a target as fast as you can work the controls, I’d say you are missing out.